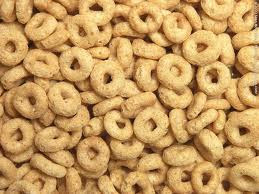 It was a gloriously chilly morning this morning.  The two youngest went outside to play baseball in the back yard after breakfast.  A few hours later they had earned a few pink noses and rosy cheeks.  I thought I'd surprise them with cocoa and French Fried Cheerios.  It was a hit!  I'm still thankful for the person who turned me on to them, though I don't remember who it was.  Ahem.

Curious?  Of course you are!

Melt 4 tablespoons of butter in a large frying pan over medium-high heat.  Add 1/2 teaspoon seasoning salt and 1/8 teaspoon of cayenne pepper to the butter and stir well.  (Adjust both to your own taste, or leave them out entirely if you want.)  Add 6-8 cups of honey nut Cheerios and mix well to coat all the O's with butter.

Stir occasionally with a wide heat-resistant spatula or scraper, working to bring the O's from the bottom of the pan up to the top.  Once the O's start to brown, stir constantly.  The browning will happen quickly now and the O's will burn easily if you let them sit in one spot too long.

Once they're as browned as you'd like, remove them from the pan to a bowl and eat right away.  They'll keep in an airtight container, but I doubt they'll be around long enough for keeping.

Posted by The Momma Chronicles at 1:07 PM

We love these! We took them on family vacation last year and they were a huge hit. :)