A new (to me) use for milk kefir - biscuits! 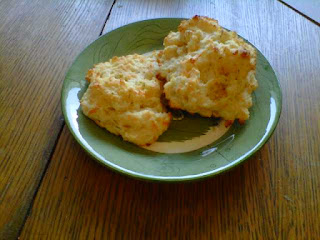 We're loving our journey into the world of kefir.  Water kefir flavored with a good organic grape juice is my favorite, while the children favor the mango lemonade.  It's fizzy and fun, incredibly easy to make, and so good for you!  It costs pennies to make a quart every day, and it's so tasty that we'd drink more if we had it.  Completely guilt free juice/soda.  Oh yes, I said guilt free.

We've only just begun to venture into milk kefir.  If you've never had it, I would describe it to you as drinkable yogurt.  You should be able to find a reasonable substitute to homemade in a better grocery store, but as always, homemade is best.  Milk kefir is made a pint at a time.  You can use cow's milk, goat's milk, or even coconut milk.  I whisk a good raw honey into mine after it's done, the children will drink as much as I'll give them.  It's another fantastic source of good bacteria and yeast.  Something our commercial food system has succeeded in eliminating from our food chain.  We've pasteurized, homogenized, non- and low-fatted our way into being the most unhealthy nation on the planet.  But I won't get started on that right now.  Others have already done it, and have done a better job of it.  I was intrigued by this blog post, and my journey towards a traditional diet began.  It's been a year-long process, and we're healthier for it.

But.... that's not why we're here.  We're here to talk biscuits, people!  Which, if I'm to be honest, isn't the best thing for you.  The processed white flour is so so bad.  But with melted butter and cheese in biscuit form?  I don't wanna be good, y'all.

None of us was in the mood for milk kefir today, so I needed to find a way to use today's batch that didn't involve drinking it.  With raw milk being $10 a gallon, I'm not wasting anything made with milk if I can help it.  I wondered if I could substitute kefir for milk in a biscuit recipe.

I made a biscuit today that tasted exactly like Red Robin's Cheddar Bay biscuits.  The children and I agreed that you would never know the difference, they were that good.  I found that I wound up using twice as much kefir as milk.

Here's how I did it.  You can add, delete, and substitute as you like.  You can leave out the cheese and garlic, roll them out and cut them to have regular old biscuits.  If you don't have kefir, you can use 3/4 to 1 cup milk.

Sift flour.  Measure 2 cups sifted flour into small bowl.  Add baking powder and 1/2 tsp. salt, then sift again into a large bowl.  (Some salt will remain unsifted, just dump it into the bowl.)  Cut in 1/2 a stick of cold butter with pastry cutter until butter and flour are well combined.  Mix in garlic, then mix in cheese.  Slowly stir in kefir until you have a nice sticky biscuit dough.

Drop dough in large spoonfuls, a little more than 1/4 cup of dough for each biscuit, onto ungreased cookie sheets.  Bake for 14 minutes at 400 degrees, until they're just cooked but still quite white.

When almost finished baking, melt other half of the stick of butter in a small dish, sprinkled with 1/8 tsp. salt, 1/2 teaspoon garlic, and parsley if you wish.  When biscuits come out of oven, brush them with melted butter and return them to the oven to bake until they're golden brown.  Set the timer in 2-minute increments each time.

Posted by The Momma Chronicles at 2:52 PM